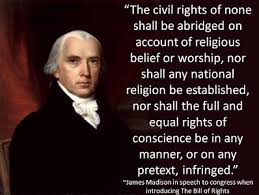 Christians in this country of the United States keep insisting that the Founding Fathers founded this country on their religion, Christianity. Nothing could be further than the truth on that.

The Founding Fathers own words refute their assertions.

When Christians, who are complete and total hypocrites on the subject of abortion, when if they studied their bibles? They would see that their god not only commanded abortions to be done, but also committed abortions himself? And that historically? Christians have committed abortions against those they persecuted and did all they could in their forced conversion programs of Pagans, Native Americans, and many others? And that proof shows that in the United States 70% of women who get abortions call themselves Christianity? And these Christians demand such laws as if a doctor or a woman get an abortion they should actually be put to death? Proves their complete and total hypocrisy on the abortion issue.

Oh and just so you all know? Just because I am pro-choice? Does not mean I am also pro-abortion. I believe the hypocrisy of Christians on the subject of abortion should be exposed and stood up to. That Christians cannot have it both ways. They cannot deny the use of contraceptives which does in fact? Prevent unwanted pregnancies that leads to abortions. They cannot preach abstinence only to our kids in our public schools, because this has been shown to be a total failure and that our kids? Deserve to be taught the real truth and facts on sex education, including the use of contraceptives, the prevention of the spreading of stds, etc.

Another exposure of their hypocrisy on the abortion issue? All the while Christians are protesting against abortions, we do not see them doing the same about the over one hundred thousand Christian priests and pastors busted for raping children. Christians will stand up and defend all the hundreds of thousands of Christian priests and pastors who have been busted for raping children, offering all kinds of excuses, justifications and subterfuge to do so, and not demanding that those who do this to innocent children also be put to death? Then that also proves their complete and total hypocrisy on the subject of abortion.

Or when Christians scream against same sex marriage? Demanding even that lgbts be put to death according to the rules of their bible and Christianity? All the while seemingly forgetting all the prohibitions against adultery, and defend and support adulterous scum like Donald J Trump? And that the bible also calls for the death penalty for those who commit adultery? Again shows how these ChristoTalibans cherry pick their bible verses to defend their hate, their bigotry and their evil against lgbts, and how much a bunch of hypocrites they are. Because you cannot go around quoting the Old Testament teachings against homosexuality, demanding that lgbts be put to death according to those teachings, while then stating that since Jesus came? Those laws and rules were changed and we no longer have to put to death adulterers according to the rules of the Old Testament.

THIS IS WHEN THESE CHRISTIANS? THESE CHERRY PICKING, BUYBULL THUMPING, CHRISTOTALBAN HYPOCRITES PROVE? THEY ARE CHRISTIAN IN NAME ONLY AND THAT GIVES ME THE RIGHT? TO STAND UP TO THEM, EXPOSE THEM AND TRASH THEM. AND THIS? IS THE WHOLE PURPOSE OF THIS BLOG.

“I contemplate with sovereign reverence that act of the whole American people which declared that their legislature should ‘make no law respecting an establishment of religion, or prohibiting the free exercise thereof,’ thus building a wall of separation between church and State.” President Thomas Jefferson, 1802 letter to the Danbury Baptist Association, Connecticut

“Whilst we assert for ourselves a freedom to embrace, to profess and observe the Religion which we believe to be of divine origin, we cannot deny equal freedom to those whose minds have not yet yielded to the evidence which has convinced us. If this freedom be abused, it is an offense against God, not against man: To God, therefore, not to man, must an account of it be rendered.”

James Madison, according to Leonard W. Levy, Treason Against God: A History of the Offense of Blasphemy, New York: Schocken Books, 1981, p. xii.

Treaty of Tripoli, Art. 11 .As the Government of the United States of America is not, in any sense, founded on the Christian religion; as it has in itself no character of enmity against the laws, religion, or tranquillity, of Mussulmen; and, as the said States never entered into any war, or act of hostility against any Mahometan nation, it is declared by the parties, that no pretext arising from religious opinions, shall ever produce an interruption of the harmony existing between the two countries. President John Adams.